Recent research has uncovered new information about the steroid hormone that male anopheline mosquitoes pass on to females during mating. 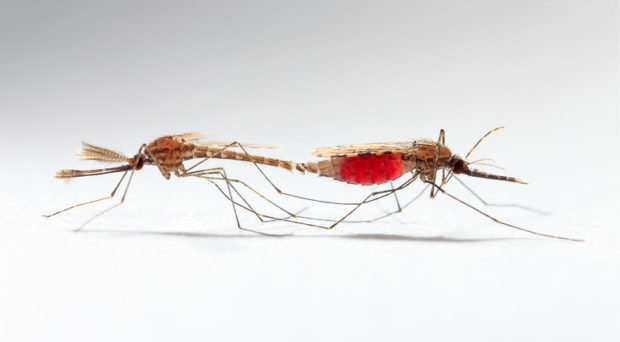 Male anopheline mosquitoes are known to have evolved a mechanism to prevent rival males from mating with the female they have inseminated, the chemical equivalent of a chastity belt. During copulation, secretions from the male accessory gland, that are transferred to the female’s reproductive tract, contain a hormone that inhibits further mating behaviour in the female.

This hormone was thought to be the steroid 20-hydroxyecdysone (20E), a hormone that was recognised to play a vital role in the induction of egg production in the yellow fever mosquito almost 50 years ago. Triggered by a blood meal, the ovaries produce ecdysone, which is converted to 20E that then activates transcription of the gene that controls the synthesis of yolk proteins in the fat body.

Female reproduction therefore appeared to be influenced by the same hormone from two different sources, but with conflicting affects. If virgin females take a blood meal before mating, why doesn’t the 20E they produce inhibit mating, and thus render them sterile?

In a paper recently published in Nature, this question has been comprehensively addressed by a team led by Flaminia Catteruccia.

Working on the possibility that the male hormone was actually a modified form of ecdysteroid, her team profiled the steroids in the male accessory glands of the malaria-transmitting mosquito, Anopheles gambiae.

Several steroids were found, but the profile was dominated by an oxidised phosphorylated ecdysteroid, 3-dehydro-20E-22-phosphate (3D20E22P), which was only present in the accessory glands of males and was not present in virgin females. It was the most abundant steroid transferred to females during mating, with a titre in the lower female reproductive tract that was significantly reduced 12 hours post-mating and paralleled by an increase in its dephosphorylated form, 3D20E.

The next question was, what modifies 3D20E22P?

Using a custom-made bioinformatics pipeline, the group searched for genes coding for 20E-modifying enzymes. A single ecdysteroid phosphate phosphatase gene (EEP) was expressed at high levels but, surprisingly, in the male accessory glands not the female tract. Transfer of this enzyme from males to females during mating was confirmed. Gene silencing experiments resulted in lower levels of the phosphatase in the accessory glands and suggested the enzyme may be specific for 3D20E22P.

A link between transfer of this ecdysteroid phosphate phosphatase and the inhibition of mating behaviour in recipient females was made when females were mated with males in which this phosphatase gene had been silenced. They were much more likely to remate than those mated with control males. These experiments also demonstrated a decrease in fertility of the eggs produced by females mated to EEP silenced males, although the percentage of females ovipositing and the number of eggs laid were not affected.

Revision of the 20E story

These results suggested that it is the transfer of 3D20E22P, not 20E, that inhibits further female-mating behaviour and that this steroid is converted to the active 3D20E by an ecdysteroid phosphate phosphatase, transferred to females during mating. This was confirmed by comparison of the effect of injecting chemically synthesised 3D20E or 20E on mating refractoriness. In addition, these experiments demonstrated that 3D20E had a much greater effect on the percentage of blood-fed females laying eggs than 20E.

Following on from this, the group also determined that 3D20E induces the expression of MIOS (mating-induced stimulator of oogenesis) rather than 20E, as was previously thought. MIOS is a female reproductive gene that was previously found to preserve egg development when A. gambiae was infected with the human malaria parasite, Plasmodium falciparum.

Interestingly, this previous finding that egg development (at least in the first egg laying cycle) is not reduced by infection with P. falciparum is at odds with findings from my laboratory. We observed fecundity reduction when A. stephensi or A. gambiae were infected with a rodent malaria. This was associated with impaired uptake of yolk protein, probably due to the induction of apoptosis in the follicular epithelial cells that govern this uptake. However, these are not naturally occurring vector parasite associations, as is P. falciparum infection.

The authors of the paper under discussion conclude that, in addition to causing the inhibition of further mating, transfer of the male hormone 3D20E during mating protects the female mosquito from the reduction in fecundity that could occur during malaria infection. This suggests that the long period of co-evolution of P. falciparum and its anopheline vectors may have resulted in mechanisms to overcome potential loss of vector fitness.