Prof. Xiaoguang Chen and his team from Southern Medical University, China investigated the infection and transmission of Armigeres subalbatus to Zika virus and dengue virus. They found that Zika virus but not dengue virus (serotype 2) can infect Ar. subalbatus via blood meal and artificial urine, and the infected mosquitoes can transmit Zika virus to suckling mice by bite. This study was recently published in Infectious Diseases of Poverty. 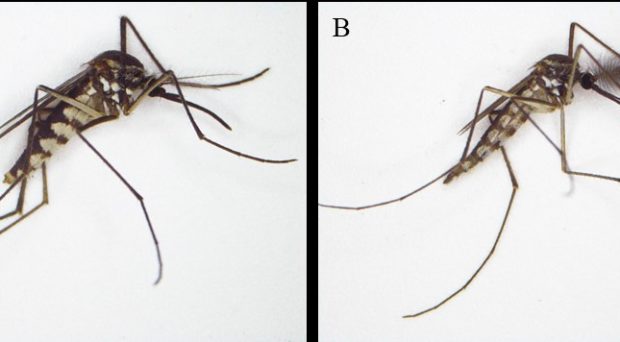 The morphology of Armigeres subalbatus was isolated from campus in Guangdong Province, China. (A) Female adult. (B) Male adult.

Figure S1 of the paper by Yang et al.

Zika virus (ZIKV) is a flavivirus mainly transmitted by Aedes mosquitoes, namely Aedes aegypti and Aedes albopictus. Zika virus infection can lead to human illness with congenital microcephaly and post-infective neurological syndromes, particularly Guillain-Barré syndrome. ZIKV was first isolated in 1947 from a febrile rhesus macaque monkey in the Zika Forest of Uganda and later isolated in Aedes africanus mosquitoes from the same forest. The first known ZIKV outbreak occurred on the isolated island of Yap in 2007, and a larger epidemic occurred in French Polynesia. In 2015, a severe Zika outbreak occurred in Brazil with increased cases of microcephaly, the epidemic rapidly spread to more than 30 other countries. WHO classified ZIKV as a “public health emergency of international concern” (PHEIC) in 2016.

Armigeres subalbatus belongs to the Culicinae subfamily, and is considered closer in morphology and genetic phylogeny to Aedes mosquitoes. Ar. subalbatus sucks both human and animal blood and is a vector of multiple pathogens, including parasites and viruses, such as Filaria and Japanese encephalitis virus. Larvae mainly develop in bamboo tubes, tree holes, dilute cesspools, sewage pits, sewers, and standing water in containers. Several investigations report that ZIKV has been detected in field-caught Ar. subalbatus, in Guizhou Province, China, and Thailand. These findings raised concerns that Ar. subalbatus may act as a vector of ZIKV. Since ZIKV can be excreted through urine, water containing ZIKV can be a transmission route of ZIKV. The rearing water of Ar. subalbatus larvae are more likely to be contaminated by the excrement of patients during the epidemic.

In our study, Ar. subalbatus was collected from a campus (23°12′03.1′′N, 113°17′20.1′′E) located in Guangzhou City, Guangdong Province, China. Representative morphology and the cytochrome coxidase subunit 1 mitochondrial gene (COI) sequencing confirmed the identity of Ar. subalbatus. The mosquitoes were maintained at the laboratory for a series of experiments. Mosquito adults were allowed to feed on the defibrinated sheep blood meal mixed with ZIKV supernatant. On day four after the blood meal, ZIKV was detected in the midgut tissue with a positive rate of 18%. The results indicated that ZIKV could infect the midguts of Ar. subalbatus. On day seven after the blood meal, ZIKV could be detected in ovaries with a positive rate of 8.3%, and on day 10, the positive rate of saliva was 4.2%. These findings suggest that ZIKV can infect and overcome the midgut and salivary gland barriers of Ar. subalbatus. In addition, ZIKV can be detected in saliva samples collected from ZIKV-positive mosquitoes, which indicated that Ar. subalbatus has the potential risk of transmitting ZIKV to host organisms.

The ZIKV-positive female adults were allowed to bite 4-day-old suckling mice. The RT-PCR and plaque assay showed that ZIKV could be detected in brain tissue of those bitten mice. These data demonstrated that the infected Ar. subalbatus can transmit ZIKV to suckling mice by bite.

When ZIKV was added daily to the rearing water, ZIKV could be detected in fourth instar larvae, and even the virus could spread to the salivary gland of grew-up adults. As with the Aedes mosquito, larvae of Ar. subalbatus can be infected by ZIKV in an artificial urine infection environment.

The Ar. subalbatus adults were fed with dengue virus serotype 2 (DENV-2) containing blood and the larvae were reared in DENV-2-containing water in the same way. The results showed that no DENV-2 could be detected in vivo. Finally, the authors conclude that a strain of Ar. subalbatus isolated from Guangdong, China, can infect and transmit ZIKV but not DENV-2 under laboratory conditions. Moreover, the larvae of Ar. subalbatus can also be infected by ZIKV-contaminated urine. Exploring the vector competence of Ar. subalbatus for ZIKV and DENV provides an experimental basis for vector control and the prevention and control of mosquito-borne viral diseases.