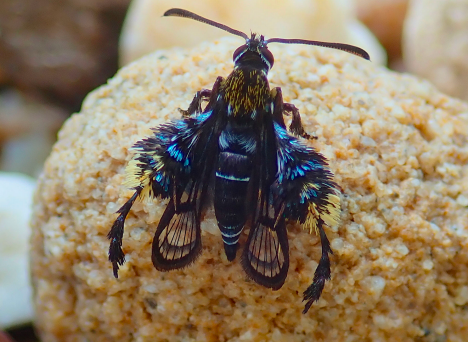 Clearwing moths (the Sesiidae family) are known for their resemblance to wasps and bees and some species even imitate their behaviours. Why would they do that?

Bees and wasps can protect themselves from predators by stinging and biting, yet some insects have no active defence system. Predators don’t want to get stung and if they have a choice, they go for the easy, unprotected prey and leave bees and wasps alone. Life in a Southeast Asian rainforest is dangerous if you’re harmless and tasty.

That is why many insects have evolved to resemble the appearance of species that can actively defend themselves, a phenomenon known as Batesian mimicry. Clearwing moths seem to have taken this strategy to perfection.

At the turn of 2017/2018, a species of clearwing moth that had not been seen for 130 years, the Oriental blue clearwing, hit the news all over the world and was placed on The Global Wildlife Conservation list of top lost and rediscovered species.

What was most interesting to us about this shiny Oriental blue clearwing moth was that we heard it buzzing in flight. A sound typically produced by bees and wasps. This discovery encouraged us to have a closer look at clearwing moths’ bioacoustics.

Using a small microphone attached to a stick, we registered the buzzing sounds produced in free flight by two species of Southeast Asian clearwing moths (Malayomelittia pahangensis and Heterosphecia hyaloptera) and the co-occurring bees (Tetragonilla collina and Apis florea) they most closely resembled. After many days of following clearwing moths and bees in the rainforest, we finally obtained enough audio recordings.

We characterized the registered sounds by calculating a number of acoustical parameters, such as the lowest and dominant frequency, and comparing them between species.

Statistical analyses confirmed our finding that began with the Oriental blue clearwing buzzing past us on a river bank in the Malaysian rainforest: the buzzing sounds produced in flight by clearwing moths highly resemble those of their bee models.

Now we know that sesiids not only look and behave like bees or wasps but also sound like them! We hypothesize that these sounds discourage predators from attacking the clearwing moths which they mistake for buzzing bees.

I study multimodal mimicry in the hymenopteran-imitating family Sesiidae (clearwing moths), covering morphological, locomotor, acoustical and chemical aspects of remarkable resemblances in the group. I complement laboratory and computer analyses by extensive fieldwork around the planet, including Malaysian and Thai rainforests, Eastern Poland’s forests, meadows and heaths and the incredibly diverse Italian natural areas, from Alpine meadows in the North to wild olive orchards in the South.

View the latest posts on the On Biology homepage